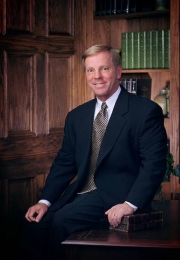 With a legal background ranging from duties as a U.S. Air Force Courts Martial Judge to services as Texas' top drug traffic prosecutor, Skip Simpson is a lawyer who has covered a wide range of intriguing matters, both civil and criminal. At the Law Offices of Skip Simpson, he now focuses primarily on psychiatric and psychological malpractice, although he rules no case out.

Nationally recognized for his expertise in suicide, he has also successfully defended clients in commercial litigation and toxic torts lawsuits. A natural curiosity and an obsession with gathering background research have given him opportunities to handle cases in groundbreaking fields of the law.

Profiled in The Wall Street Journal in 1997 for his pioneering work in suicide litigation, Simpson has been most active in cases where psychiatry and mental health questions have arisen. But his personal background reveals a varied career with stints as a military prosecutor, defense lawyer and general courts martial judge; a state and federal criminal prosecutor; an in-house trial lawyer for Southwestern Bell, and, a privately practicing civil litigator.

A commitment to public service

Officially named Texas's top narcotics prosecutor in 1985, he launched his legal career from a position in the U.S. Air Force, which put him through law school at St. Mary's University in San Antonio. After earning his law degree in 1974 - five years after joining the Air Force - Simpson became a military prosecutor and handled numerous criminal cases of recruit abuse by training instructors at Lackland Air Force Base. Later, he served as a military defense counsel and handled numerous insanity cases, which stimulated his curiosity in the mental health legal arena.

Although Simpson left active duty in 1981 to join the Dallas County District Attorney's office, the U.S. Justice and Defense departments teamed up one year later to recall Major Simpson for service as a special prosecutor investigating public integrity issues in the military. Highlights of that tenure included the conviction of the highest ranking civilian in the military in Texas.

Moving to the U.S. Attorney's office in Dallas, he won recognition in 1985 from the Texas Narcotics Officers Association and Texas businessman H. Ross Perot as the state's most effective narcotics prosecutor that year. He left the U.S. Attorney's office to accept a position as a trial lawyer for Southwestern Bell Telephone Company in 1985. He launched his own law firm in 1987.

A leading expert in legal issues related to psychological problems

With an interest in psychology, he's become one of the nation's leading experts on the legal aspects of psychological problems, handling numerous cases that deal with everything from use of false memories and multiple personalities to satanic cult worship and suicide. Simpson settled the first case ever brought by a sexual abuse "retractor" against her therapist based on repressed memory issues.

He also won a $3 million jury verdict against a neurologist accused of causing a suicide through the prescription of depression-invoking medications and negligent follow-up to the patient's complaints. In 1996, he scored a $40 million verdict in an intellectual property and breach of contract dispute largely by preventing a key psychologist from testifying against a corporate client. Again in 1997, he scored a $5.9 million verdict in another mental health case. Skip Simpson's legal career abounds with such successful verdicts for his clients.

Passing his knowledge down to students

In recognition as a leader in the mental health field, Mr. Simpson received an academic appointment in 2003 as a Research Associate of the Program in Psychiatry and the Law, Department of Psychiatry, Beth Israel-Deaconess Medical Center, Harvard Medical School.

On January 1, 2004, he was appointed as a Clinical Instructor at The University of Texas Health Science Center in San Antonio, Texas. As Clinical Instructor, Mr. Simpson taught medical residents subjects focusing on psychiatry and the law. In 2006 Mr. Simpson was promoted to Adjunct Associate Professor. In 2005 Mr. Simpson was named to the board of directors for the National Alliance for the Mentally Ill in Collin County where he served for several years.

Mr. Simpson received his Bachelor of Arts in psychology, with minors in government and sociology, from Texas A&M University, Kingsville, Texas, in 1969.

He received his Juris Doctor from St. Mary's School of Law, San Antonio, Texas, in 1975.

How a lawyer can help

Skip Simpson has dedicated his career to fighting for society's most vulnerable citizens. He works tirelessly for clients to make sure they get the attention they rightfully deserve.

For a free, informed consultation, contact the Law Offices of Skip Simpson, serving clients in Texas and throughout the nation.

The Law Offices of Skip Simpson